The impact of global heating extends beyond the natural environment. For example, global heating directly changes the number of days where productive labour can be conducted in many working environments (e.g. manual labour outside of air-conditioned environments). This can be quantified by considering the “wet bulb temperature” (WBT) which is a combination of humidity and temperature. A WBT above 31°C is generally considered dangerous to human health and incompatible with manual labour (at 30% humidity, a WBT of 31°C is approximately 47°C on a standard thermometer). Global heating increases the number of days when WBT exceeds 31°C and therefore reduces labour capacity and causes economic damage [paper]. This effect is amplified in regions where temperature is already warm, where work is largely manual (such as agriculture) and where poverty prevents access to mitigation strategies such as air conditioning, particularly in (much of) Africa, southern USA, South America, Southern Europe and many Asian countries including India and China [paper, paper]. Because the impact of high WBT days depends on existing economic wealth and means of production, the economic damage of global heating is highly heterogenous across different regions, and amplifies existing socioeconomic inequalities [paper, paper].

Due to rising temperatures, there were 45 billion potential work hours lost in 2018 compared with the year 2000 [paper]. By studying historical relationships between WBT and a variety of other human behaviours, researchers in the fledgling field of “climate econometrics” [paper] have begun to quantify other economic consequences of global heating, including on crime, suicide, injury deaths [paper] and energy use (Fig. 10). By doing so, it has been forecast that the combined damage of global heating across sectors (agriculture, crime, coastal storms, energy, human mortality, and labor) increases super-additively (quadratically) with global mean temperature, costing roughly 1.2% of GDP (over USD$1trillion) per year for every 1 degree of heating [paper].

Figure 10: Economic damage from climate change in the United States. Top row: Reduced labour capacity for low-risk (left) and high-risk jobs (where) where workers are minimally or heavily exposed to outdoor temperatures. Bottom row: Projected increases in property- and violent-crime rates. Forward projections for end of 21st century based on “combustion as usual” models [paper] .

Predicted changes in WBT can also be used to model changes in death due to global heating.  Human exposure to WBT of 35°C (50°C at 35% humidity) for a few hours will result in death even for the fittest of humans in shaded, well-ventilated conditions [paper]. Those countries most vulnerable to economic damage from global heating are also vulnerable to heat-related deaths and the occurrence of deadly heat-waves [paper] .

A case in point is India, a sub-tropical country with a high population density, low GDP and high dependence on agriculture (Fig. 11). India is the target for Australia’s expanding coal export market with some proponents arguing that coal-fired energy production is required to “lift people out of poverty”. However, like other regions with these demographics, India will experience disproportionate deaths and economic damage from global heating [paper, paper] .

Figure 11: Due to its high population density, low GCP per capita and high agricultural dependence, India is particularly susceptible to deaths and economic from global heating due to high exposure to extreme heatwaves [paper].

The impact of global heating on mortality shows substantial geographical variability: More deaths due to increased hot days in warm climates are partly offset by less deaths due to less cold days in cold climates. However, even when taking this into account research global mortality strongly increases with global heating (Fig. 12) [paper]. This relationship between global heat-related mortality and global heating remains after factoring projected increased income and adaptation (for example through increased air conditioning). In contrast, adaptation (such as better housing) has already eliminated excess winter deaths [paper]. 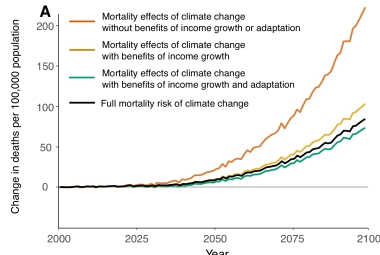 Children and older adults are most susceptible to deaths associated with high WBT [paper]. This age effect (particularly in children) magnifies the disproportionate impact of global heating on underdeveloped regions, where children constitute a higher proportion of the population demographics.

Climate econometrics thus predict substantial economic damage and increased mortality risk with global heating. These costs underlie the enormous world-wide subsidies for fossil fuels, which reflect the gap between existing prices and the full price warranted by supply, environmental and health costs. For example the IMF (the international monetary fund) estimates that global fossil fuel subsidies are approximately US$5trillion per annum, or 6.5% of GDP (this is the sum that national governments effectively pay across all sectors to support the consumption of fossil fuels at their current supply cost) [paper, report]. These subsidies are also heterogenous, with Australia paying one of the highest per capita rates (US$1200 per person) and India one of the highest in economic terms (10% of GDP). The World Bank has recently estimated that global heating could push an extra 100 million into poverty and create hundreds of millions of “climate migrants”, as people seek more viable places to live [report].

As a relatively new field, climate econometrics has matured quickly to encompass a variety of risk factors (including the WBT), their interactions and mitigation [paper].  However, climate econometrics mainly focus on the direct effect of these risks on economic and health risks, and do not currently incorporate the risks associated with other changes in the natural environment [paper], including the risks associated with collapse of keystone species such as plankton and insects, whose impact on ecological systems, economic damage and human wellbeing could be quite catastrophic [paper]. More formally,

“Because different species respond at different rates and to varying degrees, key interactions among species are often disrupted, and new interactions develop. These idiosyncrasies can result in rapid changes in ecosystem functioning, with pervasive and sometimes unexpected consequences that propagate through and affect both biological and human communities.” [paper]

In light of this, projections of economic damage and mortality that do not factor in fundamental ecological re-organization or collapse should arguably be considered very conservative.

Reductions in labour capacity from heat stress under climate warming

Estimating economic damage from climate change in the United States

The 2019 Report of The Lancet Countdown on Health and Climate Change.

The Structure of Economic Modeling of the Potential Impacts of Climate Change: Grafting Gross Underestimation of Risk onto Already Narrow Science Models

Climate tipping points — too risky to bet against

I'm a psychiatrist and professor of neuroscience with about 200 peer-reviewed publications. I studied medicine at the University of Sydney but I also enrolled in an Arts degree and studied mathematics in parallel (I also did some history and philosophy). I hence did four years of formal undergraduate mathematics (the fourth, honours year was at the University of California on an exchange program) together with medicine. Following university, I did a PhD in computational neuroscience (including some post-graduate mathematics in the UK) and then a post-doctoral fellowship in the School of Physics at the University of Sydney. I graduated with a BA (hons), BSc (hon), MB BS, PhD and a Fellowship from the Royal Australian and New Zealand College of Psychiatrists (FRANZCP). I am currently the Global Professor of Systems Neuroscience at the University of Newcastle, NSW, Australia. I also work part-time in private clinical psychiatry View all posts by breakspearblog